Birth of the project 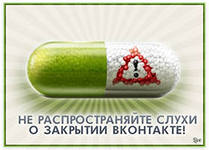 If we trace the history of formation and development of social networks, can be seen, that from birth to the present day around the project is constantly rumors about the imminent closure in contact. As usual, after another "news" hype begins among network users, associated with the upcoming blocking accounts.

It should be noted, rumors that the character is constantly changing and, often reminiscent of predictions about the coming end of the world, which predicted in December 2012 of the year. On what those allegations are based, who has once again predicted the collapse of the social network?

During its existence from a small FaceBook application turned into a mega project, control that Pavel Durov is becoming increasingly difficult. Therefore the Internet from time to time there are publications, which put forward the claim for unauthorized placement in the social network a huge number of pirated audio and video files.

In most cases, users do not even think about, that laying on your page similar materials, they violate the copyrights of their creators. Besides, The situation is exacerbated by the, that the network has a huge number of free apps, Allows you to download these files freely directly from users' pages.

For this reason, in the vast Internet is constantly drifting rumors and conducted a heated debate on the possible closure of Vkontakte. As known, Site administration has repeatedly sue for violation of intellectual property law and are entitled to claim rights holders. All disputes, usually took the form of legal proceedings.

However, it should be noted, in courtrooms never raised the issue of closing the site. It has always been, only for damages. Typically, administration of the site all the blame for breaking the law to shift directly to social network users.

As surprising as it sounds, but the courts have agreed with this, and stood on the side of the administration of the resource. Therefore hard to believe, that as a result of the next trial in touch, still closed. Although completely ruled out such a scenario Events you should not.

Among other things, in recent times there are publications on the net, in which we are talking about, that the owner of the network is simply tired and therefore completely lost interest in their offspring. Usually, the authors refer to authoritative sources or the words of Paul Durov.

But a closer study of the problem involuntarily recall similar publications, which was predicted closure Facebook. As well, as in the case of a domestic site, the decision to close the social network was attributed to its owner. In fact, all this information was another "duck", which started in the unknown pranksters network.

What to write about yourself Vkontakte?
In contact with: how to use?
How to create a page in VKontakte?
To create a note?
How to add to the wall?
How to hide a wall VKontakte?
How to pass a vote in Touch
How to increase the font in Touch?
How do I delete a bookmark in Touch?
How do I delete sent a gift?
How to remove the video in the contact?
How to come in contact with the phone?