Each person tries, like your home better than you can arrange, making it a comfortable environment for living. This leads to the placement of the house over a large number of household appliances. Cooking appliances, its preservation, water supply, its heating, TVs, computers, irons, vacuum cleaners, washing machines.

In the evening hours of electricity consumption increases dramatically, that causes knocking machine or cork and blackout housing. Electric boiler included as cooling water, refrigerators and freezers operate on the same principle, Cooling only. situation, when it turned on many appliances and urgently needed pat, frequent enough. Once included iron, there is an excess of consumers on the net, knocks the cork, and the whole house or apartment is de-energized. To save the information you need in the computer, We need some time, rather than a sharp cut-off. The question arises: "How to avoid such situations?» 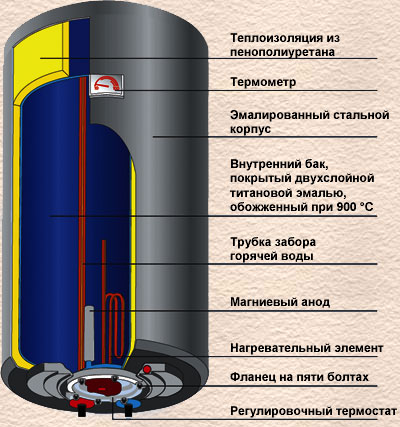 It helps regulate energy intake and avoid overloading the network device is automatically turn on the boiler with an increase in energy consumption. When the network does not have enough power to work the heater and other devices at the same time, device interrupts the circuit of the electric power boiler, PETN suspending work on time. After that, such as iron will be disabled, electric power supply circuit for a heater and recover boiler will continue to operate in a predetermined mode,. Just one additional set automatic shut-off device will help to solve a chain of problems and avoid many troubles.

Transformer together with the storage capacitor and the rectifier diode form a measuring unit. In order to eliminate the hysteresis of the device current transform coefficient is selected 1:1,5. When the current to be measured in the circuit 40 BUT, the voltage will be 60 AT.

The principle of operation is, that the setting of the automatic switching of the boiler with an increase in energy consumption to the required amperage performs the adjustment potentiometer. With a sharp increase in the voltage on the engine potentiometer with respect to the index of the zener breakdown, is opened and the circuit electrode of the transistor of the thyristor is closed to common, which is closed and there is a disconnection power PETN. About tom, that went off, A lit LED indicates.

Easy connection diagram used to collect node, in which the bypass diode bridge is diagonal. Unipolar sinusoidal current pulses pass through the SCR and heater heater. Thyristor opens and conducts, It begins once the pulse through the voltage divider. When a voltage reduction occurs before the closure of the thyristor next pulse.

When the control unit triggers, through the open transistor opening pulses of "flowing into the ground". Thyristor closes on completion of the last half-wave, and her subsequent wave can pass through the diode bridge. It is recommended to use modern optotiristors for heater power indicator in 98% of the nominal.

A connecting cylinder indicating assembly consists of an LED and resistor limits. Ignition LED indicates power supply to the boiler through the automatic switching device. When the scheme fails, heater is switched directly using the bipolar switch.

automatic switching device is characterized by quality and reliability at the highest level. Many of the faults occurring not disconnect the power supply to the TENu, but rather connect the device to a constant supply. About tom, that the heater device is connected through or not indicates Tally. 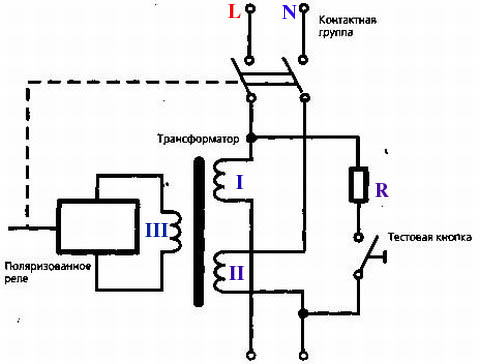 The scheme of the device

Retraction to the boiler, network input and output are connected by conventional terminal blocks. Wires are bred in different directions and mark, not to confuse. The engine regulating potentiometer - Slotted because, that the adjustment is carried out only when installing the device. In the insulating box drill a hole in front of the engine. After the adjustment hole sealed with tape.

automatic switching apparatus is mounted on the wall between the junction box and the counter or in the housing switchboard. Inclusion is a phase gap. Wires from the input counter infest. The output is put the whole apartment except for the water heater. boiler connection is made to the allotment, intended for him. Works are carried out in compliance with electrical safety regulations, what it means to de-energize the apartment.

To spend quality adjustment is necessary to determine the stock entering the current apartment. If voltage is applied to the network 220 AT, and regular users at the same time give 700 W, we get the current in 3,2 BUT. Mounted machine we designed to 16 BUT. The difference is 12,8 BUT. The stock remains with us 2,8 kW.

Among all the instruments, located in the home use, but included in the network of irregular, select a suitable user according to power to the calculated power headroom. Iron is designed for 2,2 kW. Will include iron.

Turning off the water heater regular machine. Engine regulating potentiometer set at the lowest position according to the scheme. Include iron begin to slowly rotate the engine achieving shutdown LED red and yellow LED lights. In this device adjustment is completed. Now you can switch the boiler on and even at an unscheduled inclusion in iron network machine does not work and the plug does not knock out. Just turn off the boiler, and when turned off the iron, again continue boiler to heat the water.

If you suddenly notice, that burn or not burn just two LEDs, you must first turn on the bipolar switch. Thereafter repair or replace. For diagnosis include the network again iron. Result verification - burning red LED. If the voltage is changed in the network, you need to make a new adjustment.

How to choose a good grinder, and what to look for in the store
How to choose elekrolobzik - handyman tips
The compact circular saw for home
Installation and connection of an intercom system in the apartment
The choice of modern chandeliers to the hall: options for different styles
Why flashing light in the apartment
Circular saw with his own hands
How to increase the actual supply voltage?
How to save electricity at home
Shtroblenie walls for guiding his hands
Self installing a satellite dish
Installation of spotlights with their hands