Emoticons for Skype and standard hidden, Pictures of emoticons 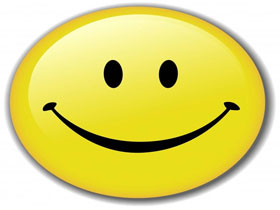 Skype has now become quite common bond, which allows not only to communicate visually with a person, located anywhere in the world, but also free to correspond with them via SMS messages. Besides, for the source to better understand emotions, that he wants to convey, correspondence include emoticons for Skype - special codes with which small images are transferred and even large images.

What are emoticons for Skype

Emoticons for Skype actually invented enough, and in each new version is almost always carried out their update and increase the number of. Therefore, in different versions Skype emoticons can be completely similar to each other. All smiles can be divided into two groups: standard and hidden.

Standard called emoticons, which are inserted into a message directly from a special dialog window, which presents the entire available catalog of images. 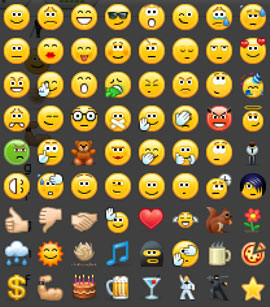 To do this, just need to open the form for writing messages, then click on the picture, depicting a smiling face, and in the window that opens, select any favorite picture and click on it. Then immediately emoticon displayed in the window with a future message. In addition, instead of the smiley it is also possible to put his code.
Hidden emoticons in Skype - it emoticons, which are not indicated in the pop-up menu, but still available in the program. The message they are prescribed by a code, and to the other party revenue in the form of pictures, so in order to send a hidden smile on Skype, it is only necessary to remember its code value. Your attention we offer a list of emoticons, are hidden away in the program: 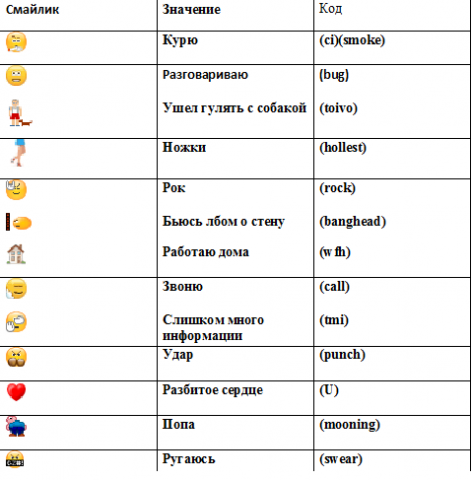 Besides emoticons, denoting emotions on Skype as hidden pictures with flags: 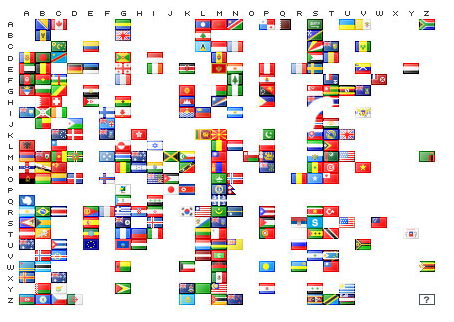 To add emoticons in Skype, and flags can be displayed in sending a message needs to be written flag code, which has the following template (flag AB), where the word flag is not changed, and the letters vary depending on the image of the flag must be substituted (alphabetic values ​​are written according to the above-presented image table with flags).

Pictures of emoticons in Skype

In addition to simple images, emoticons in Skype, you can send pictures and entire, are generated directly from themselves emoticons. And these pictures if you want, you can make yourself, for it is only necessary to turn on your imagination, as well as to know the smiley codes, so when you send such a message, image is encrypted, and the real image is displayed only after it has been sent. To images of emoticons in Skype reached in a normal unstrained as necessary, to in the program settings in the sender and recipient have the same font settings. We offer to your attention a few pictures and patterns to them:

How to call to Ukraine mobile, landline to landline and mobile