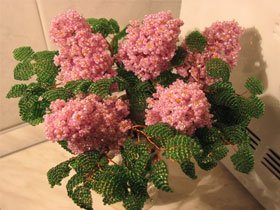 Currently, beading has become a real art, and the creation of many masters with this craft can be called true masterpieces. In fact, to learn weaving bead is not too difficult, as it may seem at first sight, but in order to learn his techniques, and even more, Do they close, you must possess such qualities, patience and perseverance. And if you do them at least a little own, and you also have a great desire to learn how to create real beauty, you can safely proceed to get acquainted with this art. Even more so that the final outcome, if you learn weaving from beads, you will never be disappointed and may even want to make this activity a hobby.

The main and most popular technique of bead weaving

Bead weaving techniques a great number of, but still the most popular of them are the following main: 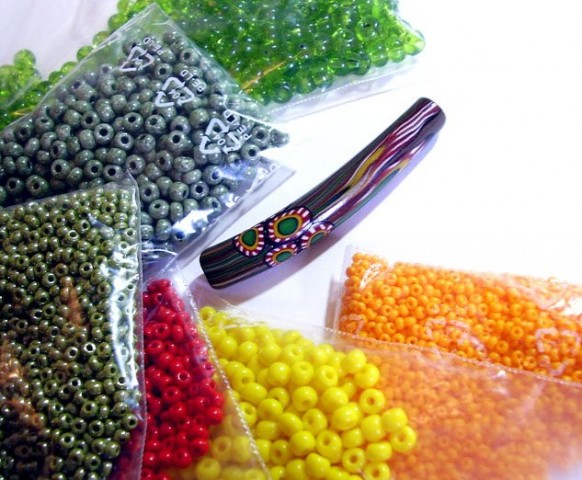 If you choose to more closely address the issue of studying beading, then you will be useful to get acquainted with some of the recommendations of the experts, which will help absorb the weaving of beads, even for beginners, and let you into some of its secrets:

Before starting work, also kindly requested to prepare the necessary materials and tools for it. Depending on, what kind of weaving technique and which product you choose, you may need: needle, thread or fishing line, crochet hooks or knitting needles, not slippery fabric as the surface for weaving and the most basic element beads. After choosing the product and tucked thereto weave scheme of beads, to start better read more about the technology of its manufacture and carefully examine the process of its implementation, if desired, may first be trained even in performing its basic elementary patterns. It is also important to prepare as soon as all the necessary elements of the product, accurately select their number. And in that case,, If you suddenly can not find the necessary color, you can experiment and to dream and to replace them with other suitable tones. Now after all the necessary preparations, you can safely proceed and create your own small masterpieces.

Very original gift, and most importantly a beautiful gift can be a bracelet, woven beaded yourself. The more that play when choosing options for this product is huge, and, if desired, and good experience in beading can think and their drawings and diagrams to these decorations. For beginners only weave beaded bracelets offer to try make the following products. 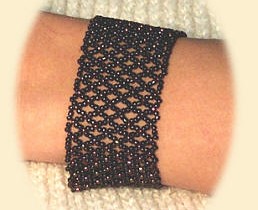 To do this, you need to prepare beads bracelet two colors, eg, black and white, Lacing a thread to the needle and. After that you can start tinkering myself bracelet:

If desired, the bracelet can be monochrome or color change, but for a more open-work pattern instead of two white beads do, for example, three.

For bracelet beads can be used one or several colors, depending on your imagination and a special clasp, but this will need to work two needles, and Nylon thread. In this example uses only the white beads. Bead Weaving this bracelet is made according to the following scheme:

For those, to whom the scheme seemed not very clear, You can use the following description of the work:

Weave trees beads allows not only fabulous and unusual, but also quite realistic. An example of this is the next job, the result of which is the stunning beauty of a tree – Sakura.

For the work necessary to prepare the following materials: beads of light and dark pink flowers, 50g, green -20g, thin wire, brown skein of thread, little plaster, Stand under a tree, Glue the fabric to the working surface. Then we proceed to the process:

Flower Bead Weaving can be done with the help of, eg, popular techniques such as the French weaving arcs, parallel, looped or combining several methods simultaneously.
Weaving beads for beginners, you can start from the following very simple to manufacture, but no less pretty colors.

To work take a soft wire white, biserinki yellow, green and blue colors and pliers. Then follow these steps::

Plaiting beaded tulip need to purchase: wire, green thread for processing stalk, glass beads black and light yellow color for the stamens; Beads green leaf, black and pale yellow stamens for, as well as two shades of colors for most of the flower, eg, pink and light pink or yellow and light yellow. For the following examples use the colors blue and blue shades. 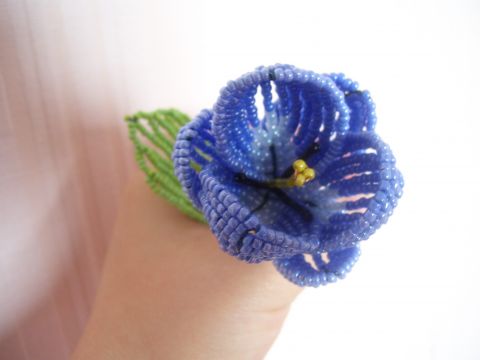 Then we start to work:

roses, made of beads, even in the simplest way out simply incomparable. In this you can be sure, viewing the following video tutorial below, and if desired, and repeat the procedure required for weaving with beads of this flower.

Baubles - it is not just a beautiful and colorful bracelets, but according to its original origin, and symbols of friendship and even love. they, who are fond of these bracelets is more serious, know, that each color, as well as a combination of several, made to weave Baubles bead has its own value and carries a certain information. So, eg, The following colors have the meanings:

Weaving baubles bead very diverse, and there are many varieties of them, eg:

We offer you a weave of beads independently following a rather unpretentious Fenichka: 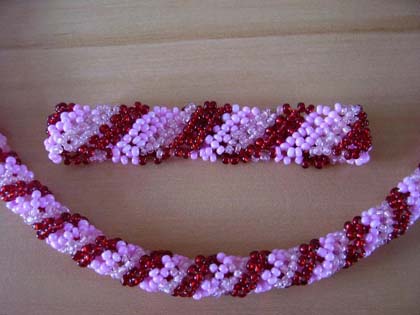 For the manufacture of the bracelet size 14 see the need to prepare a thread-gum - about 50cm,needle, beads of three colors. Then we perform the following steps:

Your attention is invited to view several of the following video tutorials weave Baubles Bead:

1. Fenichka, wicker on the machine

2. Fenichka, wicker on a homemade machine

Bead Weaving can become a very exciting experience and Leasure, if just a little bit and go deep insight into this process. And in fact, in its development is no big deal, we just have a little practice and you will also receive the most complex products. The big plus of this craft is also something, that a huge variety of products, which are made with the help of his, can be a wonderful gift for your loved ones and friends, as well as for you.