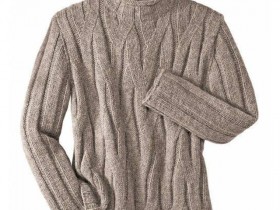 Knitwear has a huge amount of time remain relevant and their popularity not only does not fall, but also increasing day by day, the more so because everyone has the opportunity not only to buy a similar product, but also make it yourself. Wearing a very self-knitted sweater or dress is always a pleasure, but doubly, If you see their little creations and masterpieces on your favorite guy or husband or son. Therefore it is always one of the best gifts, which can be presented to the man is connected with his own hands veshchichki, It is intended as a supplement to his wardrobe. One of these things and are men's sweater, associated spokes.

How to tie men's sweater

Firstly, of course, you need to do - is to think carefully about the future model of the product, or pick it up in one of the fashionable men's magazines. The main principle of such a choice should be the ratio of the taste preferences of men and especially his appearance.
The best solution, not to make a mistake and the future of the product I had at the time to, to whom it is intended, is to create a pattern, according to preliminary measurements. The basic yardstick, that may be required for this purpose are: thigh circumference, products and sleeve length, shoulder width, neck circumference and chest, wrist, and the widest part of the hand milestone. Pattern is created as follows::
We draw a simple rectangle, denoting the width value poluobhvata chest, and the height of the length of the product.
The next step is the designation of the size of the recess for the neck of the product. For this rectangle is divided into two halves, and by his mid-deposited on both sides of the width, which is calculated by the formula: semicircle semicircle minus the chest neck. Then plotted necessary depth, for a sweater with a throat, eg, she bude smooth the distance from the neck to the seed.
Armholes on the back of the sleeves on the sides of the rectangle is drawn. Its width is calculated by the formula: semicircle minus the width of the chest back, and depth - semicircle chest divided into three. To forehand at the armhole is added 4-5 cm.
Sweater knitted mainly in the upward direction, but in some cases the top, for example if you decide to knit raglan spokes, in order that the product was a free.
The sleeve is also made in the form of a quadrilateral, on top of which it will be necessary to plot his head, which is calculated as follows:: semicircle chest divided into four plus three centimeters. The upper side of the width is equal to a semicircle divided into chest 1,5 a plus 2-3 see for free encirclement, and the underside of the semi-circle wrist.
Models of men's sweaters, associated spokes

Start learning to knit sweaters spokes men, certainly, follows with the simplest models. To begin with, you can create, eg, the following model: 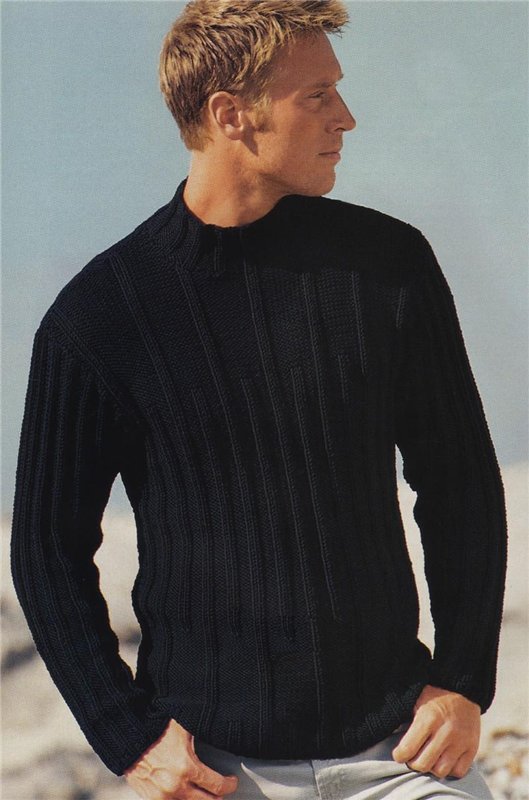 For such a great choice sweater yarn threads are of wool, as, eg, in this case, black or any other, corresponding to your preferences and tastes of men. for size 52 these threads will need about a kilo. The main patterns of the product are some of the easiest, namely: gum 1 × 1, as well as combinations of the face and reverse loops for performing the base web: 1) 4 purl, 2 facial, 2)10 backstitches, 2 facial. At the beginning and end of each row, do not forget to do edge loops.

The following sequence of articles of manufacture: 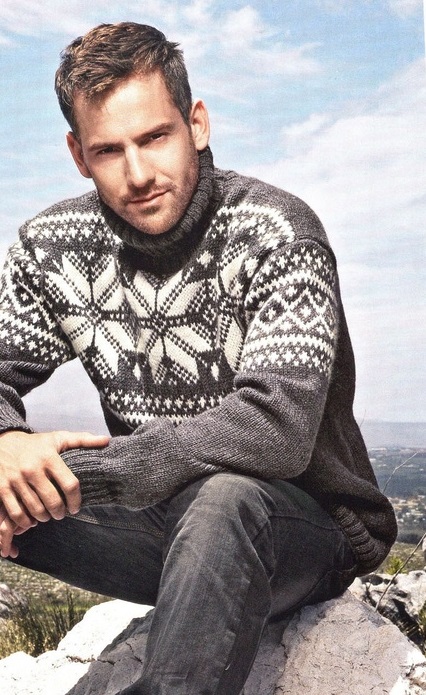 Despite, that a lot of sweaters models, almost all of them are knitted on the same technology, changing only the patterns and the shape of the collar.