Who invented the internet – history of creating a global network

Internet - a global information space, to which many computers are attached, located in different parts of the globe. Who created such a public computer network system? Who invented the internet?

A bit of history

AT 1957 the Soviet Union launched its artificial satellite. United States of America with a view to its security decided to create a reliable system, through which it will be possible to transmit information in the event of war. For this purpose it was decided to develop a computer network. This activity received multiple schools: 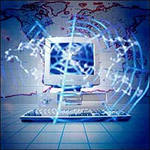 These schools and come up with the Internet. However, the original computer network was called ARPANET – AdvancedResearchProjectsAgencyNetwork. A first 1969 , the network consisted of the above scientific institutes.

As regards the financing of this project, it deals with this issue the United States Department of Defense. The connection initially left the University of California Los Angeles and the Stanford Research Institute. besides, that distance was between them 640 km. The first attempt was successful connection is not fully. What can be said about the second to get in touch, which took place on the same day. In this way, We came up with the Internet 29 October 1969 of the year. The first attempt was made in 21:00, and the second - in 22:30.

Later development of the ARPANET extended to scholars of other fields of science. AT 1971 it was possible to use already the first program for the transmission of e-mails on a computer network. The demand for the use of this program immediately rose. And in 1973 year of, who came up with the Internet and how to use it recognized all over the world. AT 1983 , ARPANET switched from NCP protocol to TCP / IP. It is used to integrate computer networks today.

In the same year the name was changed ARPANT Internet. After a year of domain names learned not only web pages creators, but also ordinary users of the Internet. AT 1988 year, after invented Internet Relay Chat, WAN users to chat online chat rooms.

The idea of ​​creating a global network emerged only 1989 year in Europe. Somewhat later, a scientist Tim Berners-Lee created the http protocol, having developed such languages, how URI and HTML. On the project World Wide Web worked as researcher Robert Kaillialu. Thanks to the work done in 1991 year on the internet to know the whole world. And in 1993 year appeared the famous web browser – NCSA Mosaic.

Due to open technical standards for global network, at 1997 year it was connected about 10 millions of computers. To exchange various information via the Internet has become available and popular.

Who invented the internet, at the time I did not think about that, how many computers will be connected in the future to this network. Not to mention the availability of the global network through communication satellites, TVs, Cell Phones, smartphones, electric wires and other electronics news.

To date, the Internet - it is an integral part of the life of each person. About RuNet heard not only the Russian-speaking population, but also people from other countries. Domain names su, ru Russian Federation, and to create sites used by many webmasters.

Modern Russian network appeared in 1990 year due to many domestic programmers and physicists. For the first time a Russian domain ru It was registered in 1994 year 7 April. But the domain of the Russian Federation was only established 12 May 2010 of the year. Today there are a large number of specialized Web programs, by which the users are located on a wide area network. Not to compare with modern Internet ARPANET. Each user of the network is grateful to the, who came up with the Internet.

How to create a trollface?
How to find the man in the photo?
How to find a person by phone number?
How to Use Steam
Free SMS sending- messages
Where you can communicate on the Internet?
How to book your seat
Ask: can we learn, who writes to you?
How is it possible to book a train ticket?
How to issue a ban?
Why the need for Microsoft Silverlight?
How, possibly, get a win on the Internet?