How to knit a column hook: types of hook bars, video 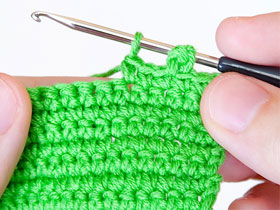 The basis of crochet are various bars. So before you start tinkering any thing desirable to learn from each of them is knitted, and then practice in their implementation in order, subsequent to the knitting did not cause any difficulties, and painting a smooth, beautiful. The main columns, worth to learn, and the designation of the schemes are to remember:

How to tie a hook polustolbik

Polustolbik is also called a connecting column. He is one of the easiest, so polustolbik knit crochet is quite simple. To do this, proceed as follows:

Besides, which can be attributed polustolbikami canvas for future product, it is also used to:

In circuits connecting bar or polustolbik typically denoted by the symbol point, or round tick, downcast. 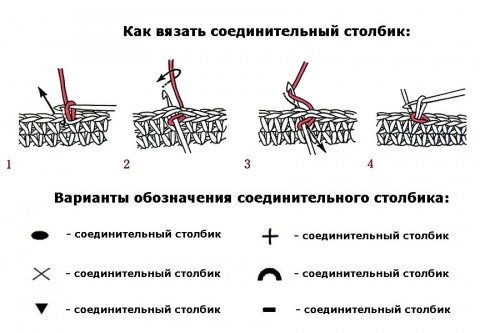 Tie bar connecting hook as possible and with the sc, this column also has a second name - a solid bar. The following actions are performed to create it:

How to link a column without sc

Column without nakida also fit quite simple and it is done in two stages:

Using the column without nakida can create a web having different patterns, using for this purpose a variety of knitting techniques, which differ in the way the introduction of the hook in the previous series of articles. In this way, column, without sc can be done in the following ways:

When knitting circle column without nakida can be created by inserting a hook into the bridge between the loop of the previous row.
More often than not, without sc column represents a single stick or an icon in the shape of the letter "T", but other than that there are other designations: 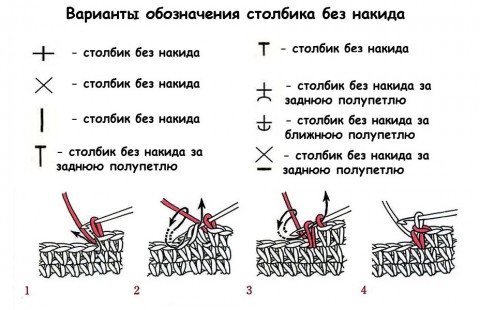 How to knit a column with sc

When knitting fabric columns with sc product is a more filigree and light. He is as follows:

Column with sc, as well as you can, without sc provyazyvat, capturing two walls loops of the previous row, the front or the rear wall, introducing the hook between the posts or in two steps and thus obtain different drawings web. EXAMPLE knitting column with nakida in two steps represented in the following diagram:

In addition, if desired columns it is possible to create not only one sc, but also with two or more. They made a little harder, but knitted fabric are obtained much more beautiful. Are indicated by the columns with SC most often the sign of a crossed out vertical stick. The number of perecherkivaet means the number of nakido. Consider, how to make a column with two sc:

Columns with a large number sc provyazyvayutsya the same technology, pairwise knitting stitches, as the post with two sc, and the more nakida, the higher the bar is a ready. Such columns typically used to perform complex open-work patterns, as well as the need to make the addition of the number of loops in the web.

How to Knit a relief column hook

Relief columns commonly used in knitting gum, pattern "spit", or any other interesting relief pattern. Driving their implementation is slightly different from creating a simple column with sc. Relief columns are of two types:

facial, disposed before work or convex.

purl, located at work or concave.

A distinctive feature is the relief columns, that they do not begin to make a chain of air loops, and perform only after provyazyvaniya at least one row of columns with simple or sc.

Consider in turn how to knit convex and concave bar.

2. concave postik It is a bit more complicated. For him, all actions are performed in the same way, as well as for personal relief column, but when pulling the thread hook is introduced into the second loop so close previous, that she was under the hook . This is done as follows: the hook is inserted for the web and covers the previous loop from left to right and working the thread is pulled through the loop on the wrong side.

If desired, the fabric can be knit a concave or convex bumps, then it will turn out the same on both sides, or alternate, alternately provyazyvaya their ranks, In this case, the front side of the product will smooth, Wrong and how to rib. Also raised columns tally with one sc, but in this case also provyazyvaetsya column in two stages by two tabs.

How to Knit a magnificent column hook

Very beautiful lush bars obtained vyvyazannye hook. At first glance it may seem, What makes them difficult, but actually it is not so. To do this, just follow these steps:

How to Knit crossed bars

Crossed columns, you can create as a whole cloth, and is knitted them in more complex

patterns. Most of these columns are labeled with an icon, having the form of two crossed rods.

Crossed bars are performed according to the following scheme:

In this way, learning how to do all of the above columns, everyone can associate yourself at least a couple of interesting veshchichek.