How to Knit in a circle hook 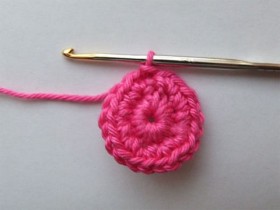 Using the hook and the thread can be various geometric shapes vyvyazyvayut. One of the simplest, of which is a circle. Knit in a circle hook is not difficult, and in some cases even easier, than a simple rectangular cloth. By learning vyvyazyvayut this geometrical figure, then you can safely explore knitting techniques napkins, headgear, as well as many other interesting articles.

Where to start knitting circle hook

Usually, start knitting circle hook, you can use two basic and most common ways:

In that case, if you want to knit a tight circle, without the formation of holes in it in the middle of canvas, the best option would be to start knitting circle from one loop. This is done as follows::

Knit ring of the chain is also very simple. For this:

How to learn how to crochet circle

Crochet circle, you can use any columns, and using stitches, the main ones are polustolbiki, as well as columns with and without sc . In order to get a smooth result, knitting circle, you need to know a few secrets of its performance:

After you have mastered the basic techniques, crochet circle can safely take on more complex openwork patterns, or make circles using thread of different colors.