How to knit crochet patterns, photo and video examples 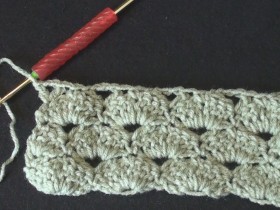 For many years, the existence of such crafts, how to crochet an enormous amount of development. Needlework of all time was made in it a lot of adjustments and innovations. Currently, this kind of manual knitting enriched with lots of different patterns, with which you can create true works of art. Among them is very unpretentious, which afford to tie even for beginners, and only a little more complicated, for them may require a lot more time and effort. But all the patterns can be divided into the following groups:

Let us consider each of these groups and some examples of its patterns.

reticulation, so named, because the shelf reminds fishnet. Their main difference is in the sizes and shapes of holes mesh. One of the most popular among experienced handy is the sirloin grid. Consider in more detail below following reticulate crocheted with circuits and their description.

The following are several schemes for independent parse:

Simple patterns combine various drawings paintings, by using the simplest methods of knitting: Pattern of columns, without sc. In all ranks is two lifting loops in the beginning of the series, then each loop is knitted next column without sc. 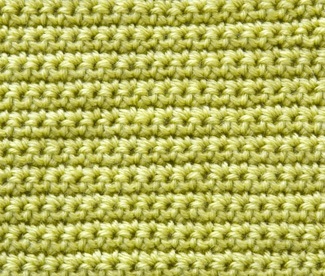 Pattern of columns with a single sc and more. It is made only from the columns with sc. At the beginning of each row number of the lifting loops is incremented by one in accordance with the number of sc, i.e, if you have done one sc, the stitches should be three, and if two, then four, and so on. 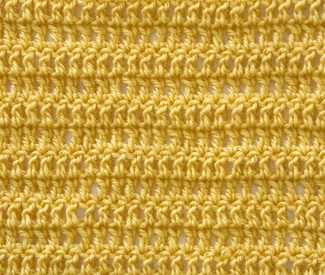 Figure matings may vary depending on for how many and what kind of wall loops were knit column. Make a simple hook knitted pattern as possible and with the following schemes:

Openwork patterns are a very gentle and graceful figures, sometimes like a beautiful gossamer, and they are usually carried out by thin threads and crochet. They can also be attributed, and lace patterns. Openwork patterns made by a combination of braids and columns of stitches. Typically, using such patterns make light summer clothes, and various decorations for the house, such, eg, as tablecloths, blinds, napkins. Openwork patterns, in turn, is also a huge amount of. For example, we give the following pattern and the description scheme. 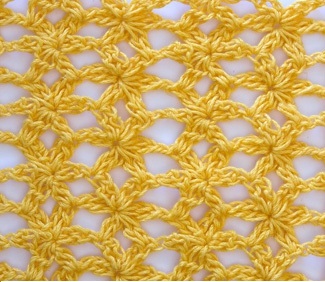 For samples that are a chain of 14 stitches. At the beginning of each row do not forget to do 3 loop for lifting a number:

We suggest to try to link the following samples, showing openwork crochet patterns on their own:

shell pattern, so named because, that contains the picture element is very similar to the shell. It is commonly used as well as the delicate thin and light products. The core technology of a pattern very similar to shell and performed according to the following scheme:

Can engage in a loop with both columns one and 2,3-ring, and even a large number nakida. And the number of sc depends on the height of "shell" pattern. Provyazyvaemyh number of columns is better to take an odd, knitting to get a smooth and subsequently not deformed. The distance between the "shells" pattern is left for, that the product is not pulled, and the main elements could stay in a nice figure. At the beginning of knitwear pattern "shell" it is very important to correctly calculate the number of loops, so that the main elements in the product vyvyazalis in drawing in full.

Dense patterns are knitted in the form of whole cloth, containing no holes. They combine different weave the most simple columns. Tight knit patterns can be warm and bulky items. Very good looks in the finished product, eg, Now this pattern: 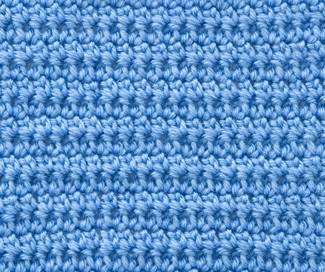 And is it also not hard to do, in the beginning of the series is the two lifting loops, and all the loops of a number of elongated columns provyazyvayutsya without sc:

, where - an elongated bar

Elongated column is as follows:: introduce a hook into the loop of the previous row, grab a working thread and pull the loop, from which vyvyazyvayut 1 pp, whereupon provyazyvaem obtained two hooked loop. 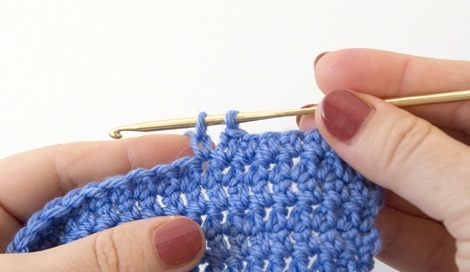 Jacquard or multi-color patterns are called patterns, are performed using several yarns of different colors. Such patterns can combine simple, thick, fishnet and mesh patterns, either be made in one of the following options. Jacquard crochet patterns a little harder, since it requires working with multiple threads, but some of them are lightly, that any beginner will master. Very easy to carry out, eg, the following pattern. It uses only two colors. 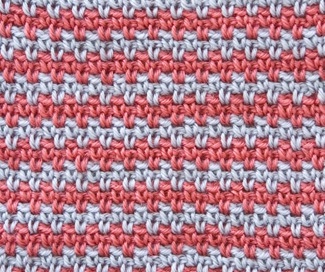 Each color provyazyvaetsya two rows, performed according to the following scheme: 1 pp. recovery, sc without a column in the arch of the previous row, 1 pp. 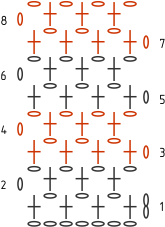 After working out, you can try to crochet and following patterns:

Embossed pattern we obtained voluminous and prominent figures. they tally with the help of relief columns. Excellent looks in a pattern such as a knitted product: cardigan, sweaters, tight blouses. Very cute looks, eg, pattern "wafer": 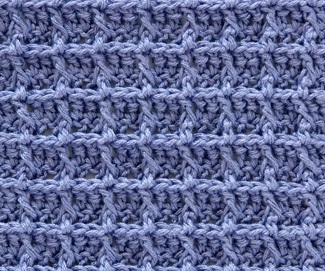 This figure is knitted as follows: The first row of columns is done with a single sc, at the beginning of each row to lift the tally three ce. The second row is created by alternating 1 Article. s / n i 2 embossed convex column. In the third row of the relief columns made columns with sc, and above the bars with sc relief. Further, knitting is repeated from the second row. Using embossed columns can also crochet relief gum:

Motives are called individual elements, from which various products are collected. Patterns for motifs can be very diverse, and they are based on any of the types of available patterns. For models, created from the motifs are usually made patterns, in order not to get lost in the process of manufacture of the product. Further, we suggest you review the following video crochet from motifs:

For beginners, we recommend to choose not too difficult in the performance patterns, to the process of knitting does not turn into hard labor, and gain experience, you can explore the rest of the open spaces of the fabulously exciting world crocheted crocheting.