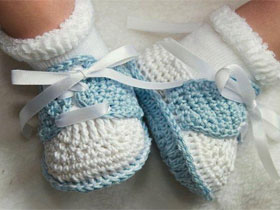 Tinkering little things for kids, and especially for babies a lot of fun, the result of which always makes melt and causes only positive emotions. And when you see the fruit of their labor and the baby, why, I always want to do something else for these little tots. One such lovely and interesting veshchichek and are booties. At first glance it may seem, that they do is extremely difficult, but in fact it is, of course, not so. It is only necessary to have the most basic knitting needles or crochet skills, have patience, little training, be careful when working and, of course, during disassembly circuits.

How to knit booties tips for beginners

Before knit booties, all beginners need to pay attention to the following:

Once selected yarn, you need to decide whether you want to tie booties knitting needles or crochet yet. Then selecting the desired tool can begin to create.

Many needlewoman consider, that tie booties spoke much easier and faster, than hook, even for beginners, especially because it can be done in different ways: using the auxiliary or without spokes are only two, as well as due to the fact, that the required product is very small in size. We offer you to get acquainted with a few instructions on knitting bootees via spokes.

How to tie booties spoke instruction for beginners

Pinetochki, associated with this manual are designed for year-old kid. For knitting, you will need 40-50 gram infant acrylic yarn and knitting needles of the third issue.

How to tie booties on two spokes

Assign booties on two spokes are also quite difficult not, and perhaps even better than, if you use a helper, since nothing will stop knitting. Therefore, you can experiment and try to make a colorful and never monotonous product. Knitting we need circular needles and children acrylic yarn white and blue, needle stitching, as well as the cardboard strip for the future of pompom. Once you cooked everything you need and you can start to work itself.

4. Make a hole for the strap

One series provyazyvaem as follows: 2 loops along the front loop, 1 sc and so on until the end of the series. 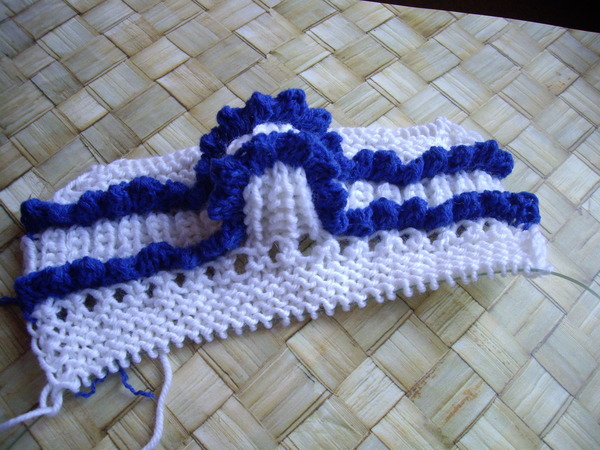 The following eight rows all loops knit facial. Then do another ryadochek cloves, with white thread on blue should not be changed at this time. In a series where we fix the kinks first distal edge not leave, and start throwing out provyazyvaniya and loops it to her, additional loops does not pull out the white dotted line, and out of the blue, located directly above it. Then pinetochek sew along the bottom and rear side, it's desirable, soft seam, or proceed to the outer and the second knitting booties.

After both the shoe ready, making them two cords, in the form of braided pigtails, or a chain of air loops, and vdevaem them prepared for this hole.

booties If desired, two or decorate POMPON, fixing them on the edges of the lace, or sew the middle peredochka. Pompon can make follows: 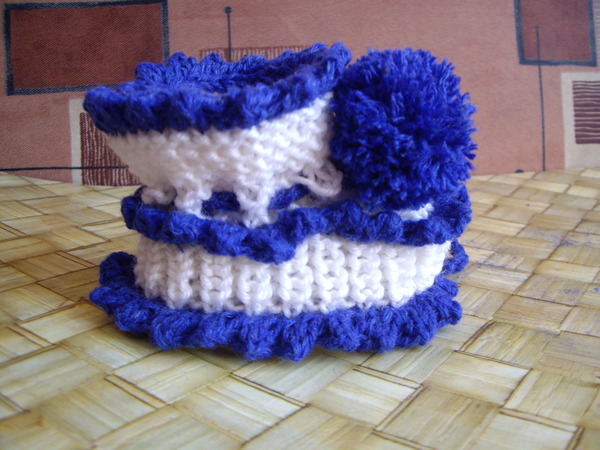 How to tie booties boots spokes

We offer you to get acquainted with one another How To Videos, tells how to knit booties boots:

How to knit booties crochet

Despite, that many believe, crochet booties that much harder and longer, Yet this view is controversial. Since using the hook and thread can also create real masterpieces and spend it not much time, and knitting variants of this huge amount of products, it can be booties shoes, the shoe or even small sneakers. So do not immediately abandon the shoe to try to knit with a hook. Consider a few not very complicated instructions how to tie a beautiful booties for babies and older.

How to tie booties crochet description for beginners

very beginning, worth trying to make the following description of the product, which tells, how to knit booties, step by step:

How to tie booties - sneakers hook

For those, who wants to associate anything unusual, you can try to tie booties sneakers, which look very pretty and cute. These instructions are knitted booties for 3-6 month baby, but you can calculate the size of your baby's legs and increase or decrease the calculation loops. 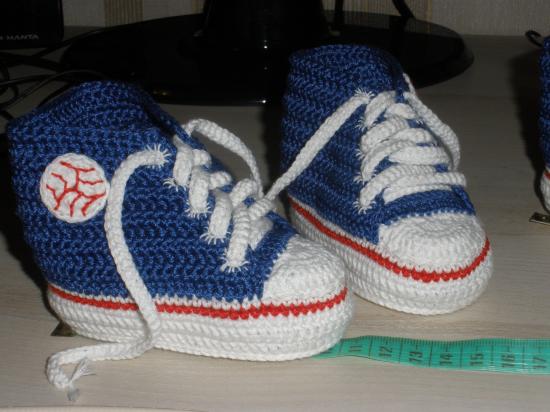 To work needed to prepare the white iris, blue and red colors and hook №2. Knitting this little miracle begins with the soles, namely with its center. Very detail shows, how to link the following detail booties crochet scheme shown below: 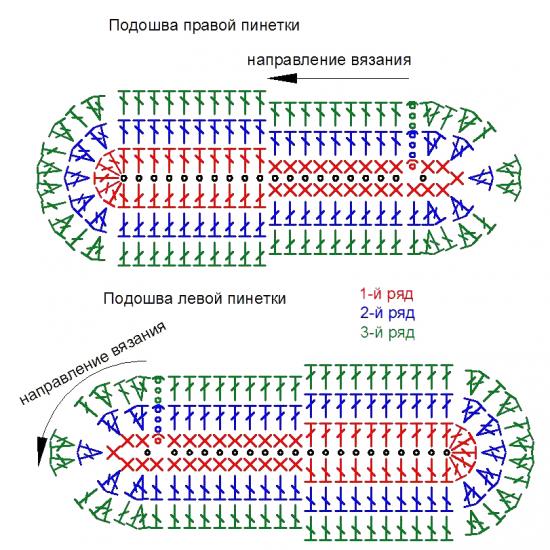 Consider, Yet in more detail how to do it:

Change the white thread on blue. We find the center in front of the sole and calculate the 7th loop on the one hand the center and mark it with a thread of another color, then on the other side does the same. 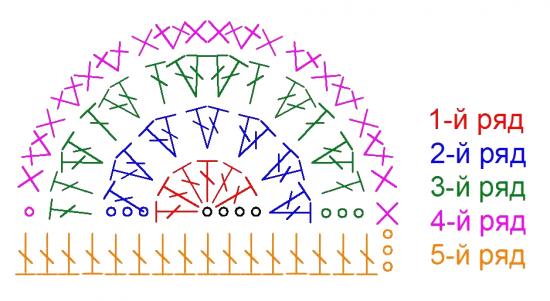 After that, all parts are connected, you need to sew from the wrong side of the tongue convex part to the front booties with white thread. Sole binds hook, and holes are sheathed by a needle and white thread. Lace is made of 190 stitches, in which provyazyvayutsya bars without sc, and then it is passed in the holes. Second-bootees kedik masters in the same way, as the first.

Create small pinetochki for infants and for older kids not so difficult, you had to make sure, and the pleasure of the product, hand made and worn by a toddler, you get huge.