How to make a paper swan with his own hands? 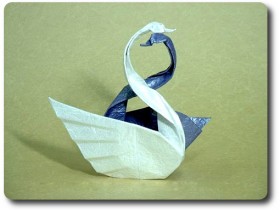 Before describing the process, how to make a swan made of paper, a little touch on a paper creation itself. Since childhood, we have already come across this, the so-called, art. We produce boats, which then set sail, some collect frog, airplanes, flowers. Also, paper can perform Swan. Just do not confuse with crane. This is not what.

How to make a swan made of paper?

Cygnus can do simple and complex. A simple embodiment is made from a square sheet of paper, which is folded so, to get two layers in the form of figures: diamond and triangle. From Triangle Business beak, and of a rhombus - wings and tail. It's very simple, It makes even a child. But we will consider the creation of another swan. Advanced embodiment is characterized in, that it is made from modules. Swan obtained voluminous and very beautiful. This is a complex and lengthy, for a single day works, Job.

How to make origami paper swan? 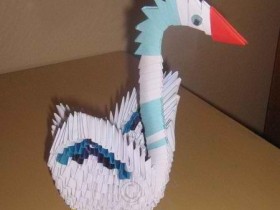 to understand, how to make a swan made of paper, We have to submit, how it should look assembled. Swan origami consists of several parts, are inserted into each other. Done it without glue.

Should start with the paper selection. It should be tight. Suitable conventional paper printer. come into play.

That's all. All items used, swan ready. You can come up with - or support for poultry, eg, a circle, cut paper of a different color.
Yet there is another way of, how to make a swan made of paper, with the use of colored paper. Details are the same, as in the first embodiment, only distributed in color. Having made such a swan, It can be proud of the result.

How to make a star of paper volume with his own hands, origami: diagrams and instructions
How to make a paper boat