How to cook the soup right? 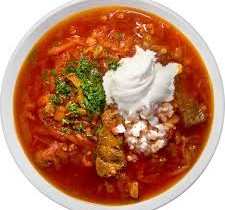 Soup came to us from Ukraine. There are many recipes for borscht, but in practice they are all the same, They differ only on a set of products.
How to cook borsch, Any housewife knows. Especially, If there are men in the family. But not every woman can cook the soup really tasty. Let's try to help her in this.

How to cook a delicious soup?

This starts with a soup broth. For its preparation is wise to use a bacon: pork and beef. meat cut, wash and put in a pot with water. Boil it should be two o'clock, periodically removing foam. In order not to suffer with foam, You can use the following method of preparing a bouillon. A piece of meat put into boiling water and bring to a boil again. Then drain it, Rinse the meat and, Bay cold water, again put on fire.
With meat understood, Now vegetables. on, the order in which the vegetables were laid, It depends on the taste of borscht.
Beet. Her before placing a pre-boil. Then, cut into strips, fried in butter. Onions and carrots fry separately from the beet with the addition of tomato paste and parsley. Prepared vegetables sent to the broth in the following sequence: potatoes, through 10 minutes cabbage, through 5 – beets with stabilizing, and for 2 minutes before end of cooking add the garlic.
And last, how to cook soup, that it was fragrant? For this use, as spices parsley, Black pepper and bay leaf. This is a mandatory set. You can also add and then, that you prefer to taste.

How to cook Ukrainian borscht?

The main condition for Ukrainian borscht - a thick. As they say, to spoon stood.
How to achieve a density?
You can put the potatoes in the soup twice. First, chopped, which seethe. Then add a large potato, that it will retain its shape until the end of cooking. Thickness can be made using flour or semolina. passaged flour, semolina and fry with vegetable oil. Add it at the end of cooking.
How to cut vegetables?
What vegetables are used? Beet, carrots and onions, tomatoes or tomato paste, fresh or pickled cabbage. To do them the same actions, as described above. Cut can be arbitrarily. But practice shows, so that it is better: potatoes - diced, coarsely grate the beets, and the rest - straws.
The order of addition is already known. The only difference is in the garlic. Instead, it added to a premix. Old fat crush with dill, green peas, garlic, parsley and salt. added, soup boiled and all, switch off. Ukrainian borsch with donuts eat.

How to cook soup with beetroot? 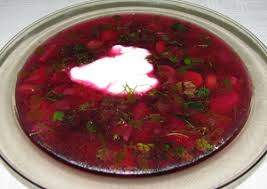 Beet borscht put almost always. Do not use it, if someone - a family member does not like this vegetable or get allergy. The principle of cooking borscht and order Bookmark vegetables we have already discussed. We draw attention to the fact, how to cook soup, that it was red. This color will give beet soup.
Young beets are always red, but the winter is worse. Soup to get the right color, beet fried with vinegar or pineapples. The effect will be that: the color is saturated, the taste is sour borscht, and beets will remain solid, Though boiled.
That's the whole story of borscht. Let this article will be useful to you.