How to cook a delicious broth multivarka? 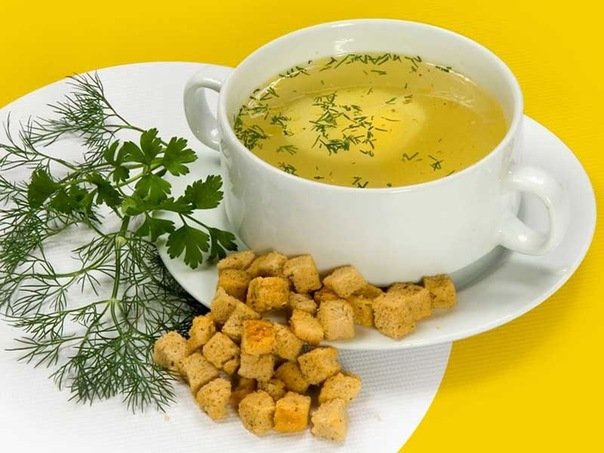 Bouillon (by franz. boil) - a fat, prepared by boiling meat, birds, fish or vegetables, which is used as the basis for a variety of soups, sauces, but can also be used, and as a separate dish. For broth, as a separate dish, can supply different savory pastries (cakes, pies), garnishes (cereals, egg, Knel, croutons et al.)
Conventionally, there are three kinds of broths, based on the technology of preparation: white, yellow and red. white broth made from unroasted ingredients, yellow - from unroasted meat or bones, but podpechennyh vegetables and roots, red It is prepared from the roasted meat, roasted vegetables and roots.

How to cook a delicious broth multivarka?

soup cooking in multivarka It has its own characteristics, broth long languishing at a constant temperature, which has a positive effect on the quality, allowing a very tasty and nutritious broth. In this case, almost no foam appears, and all useful extractives go into the broth, saturating it with proteins and micronutrients. 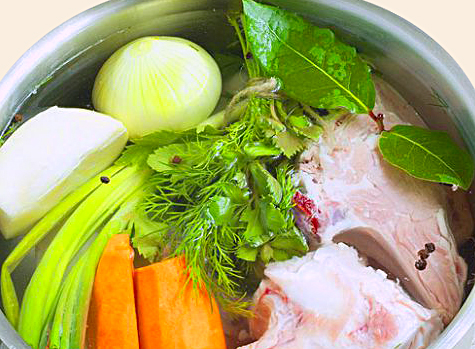 1. How to cook meat broth in multivarka?

For the preparation of meat or meat-and-bone broth multivarka we need:
a piece of beef (pork, lamb) on 600-800 g (you can take the bones with meat), 2,5 liters of water, 1-2 carrots, 1-2 bulbs, Lavrushka, black pepper peas, allspice, salt, garlic, parsley root, celery.
1. Carrot and onion cut into halves and gently podpekaem in mode "Baking / Roasting".
2. In the cup to lay the vegetables cut into pieces of meat, salt, spices and fill water, close the lid and turn on the 2-3 hour program "Quenching", if only we take the meat, and if the boil meat bones, to the 4-5 hours. Bones can also be pre podpech in "Baking" mode to impart flavor.
3. We take out the meat, and broth necessarily we filter through a sieve.
Council: that the bones do not scratch the finish Multivarki, Some housewives are placed on the bottom of a special silicone mat.

2. How to cook chicken broth in multivarka?

To prepare the chicken broth in need multivarka:
2,5-3 liters of water, a small chicken or chicken bones with meat 600-800 g, bulb, 1-2 carrots, garlic, a mixture of peppers, parsley or celery stalks, salt, Bay leaf, bell pepper.
All we put into the bowl and fill Multivarki cold water on the label. Put "Quenching" mode 2-3 o'clock. Do not forget to drain the broth. 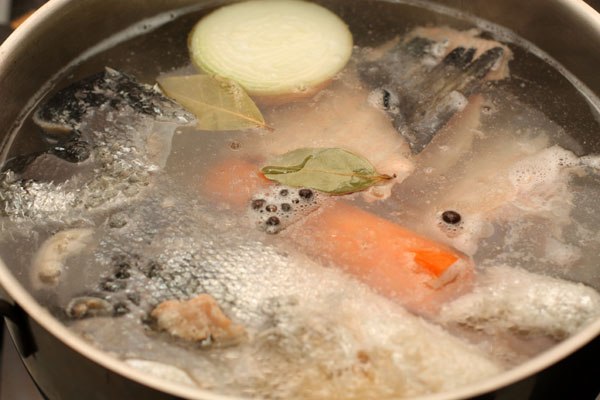 3. How to cook soup of fish in multivarka?

To prepare the fish broth in multivarka we need:
2,5-3 liters of water, some of which can be replaced with dry white wine, fish head, of which removed the gills, tailings, parts of carcasses or ridges, about 2 kg, bow, carrot, stems leek, parsley, allspice, Bay leaf, salt.
Ingredients laid in multivarku, fill with water and put "Quenching" mode 1 time. we filter the broth.

4. How to cook vegetable broth in multivarka?

To prepare the vegetable broth in multivarka we need:
3 liters of water, 2-3 bulbs, 2-3 carrots,(you can optionally add white cabbage, cauliflower and potatoes), half a head of garlic, 1 parsnips or root and parsley, Lavrushka, celery, you can optionally add a little chopped ginger, allspice and black pepper, salt to taste.

1. We put "Baking" mode 20 minutes, We pour a little vegetable oil on the bottom of the bowl and fry the onion coarsely chopped, carrot, garlic, peremeshaem.
2. Laying the remaining ingredients and fill with water. expose "Quenching" mode 60 minutes.

5. How to cook mushroom soup in multivarka?

How to cook soup in multivarka?
The coffee is harmful?
Useful than coffee?
What can replace the coffee?
How to make coffee in the coffee maker?
In which of the drinks contain more caffeine?
How to store coffee properly?
What brewed coffee?
How to brew coffee without the Turks and coffeemakers?
Secrets of cooking chicken hearts
How to make coffee in Turku, recipes
What is the best coffee?