How to play the mafia on maps? 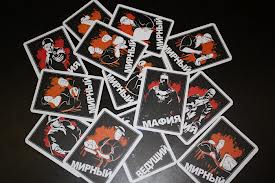 If you are cunning and resourceful, not against anyone deceive, the game of Mafia - this is for you. to understand, how to play Mafia, it is necessary to know its rules.

What are the rules of the game in the mafia?

Participants in the game - it's the players and leading. Players can be between six and more people. The optimal number of participants from 13 to 17 people. driving tasks.

Lead is also aware of, who the mafia and honest citizens.

How to make a card for playing mafia?

To play Mafia, We need maps. Basically, can say, that they are in the game are not involved, and the need to define the role of the player. Therefore it is better to use special cards, ie role. You can buy them or make your own. The deck should be at least 30 copies in the case, if the players will meet many.

Remember: cards must be exactly the same shape, have flaws, or they may have noticed rivals. In fact, play mafia is very exciting. If you have not played, then it's time to start.