How to learn to knit for beginners with photos and video 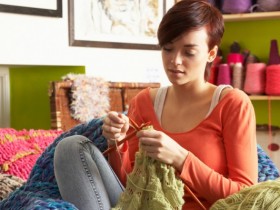 Currently, hand knitting using spokes becoming more and more popular. This is not surprising due to the possession of this art can create a great variety of different veshchichek. Moreover, it can be, as clothing, for different times of the year, and a variety of crafts. Learning to knit is not difficult, the main thing that it was to develop something new to this aspiration and desire.

Most important issues, which is necessary to obtain an answer to all beginners, before proceeding is directly next to the process:

During the long period of time, a needlework, as manual knitting to do but do not mean and now skilled craftsmen and craftswomen for convenience invented by a sufficient number of, as the main tools, and auxiliary. Know about that, to learn to knit for beginners, It is very useful. Consider separately each of them:

Very important is the ability to choose the right yarn and needles size for future product, since this factor directly affects the quality of knitting and future results.

How to select the size of the spokes

All kinds of spokes, regardless of their destination has its own number and very well, if it is marked not only on the packaging, but on most spoke, in order to avoid confusion later. Needles number denotes the size of its diameter. In total there are more than ten spokes rooms. 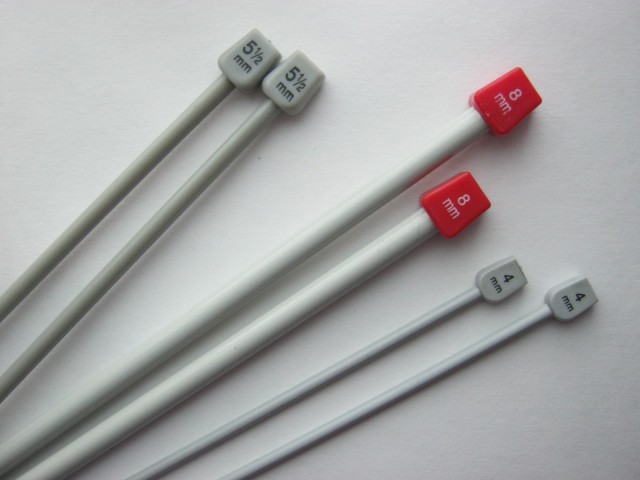 According to the generally accepted rules of the spoke to be twice as thick, than the selected knitting yarn. But in fact, the thickness of spokes is better to choose for each individual, since the machines and knitting density of all its own. For those needlewomen, which have a more free style knitting stitches, better to buy needles with a diameter of 1,5 times thicker, than the thread, and who likes to knit tightly, Yarn should be 2,5 times thinner spokes.
For knitting gum, in order to make it as flexible and elastic, it is also desirable to take the needles with the same diameter as the thread, or only 1,5 times thicker.
In this way, If you want to associate light summer or the delicate little things, the best fit fine needles with numbers 1 and 2; for more dense items and threads, created a few additions, excellent option could be the spokes with a diameter of 2,5 -3. Starting with the third issue, needles for knitting are taken solid and bulk items, generated from the thick filaments. These needles can create a pull-overs, jackets, hats, bags and even jackets and coats. 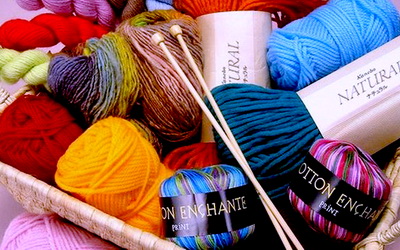 Cotton. This yarn can be attributed absolutely any pattern, and at the same time he received an unusually beautiful.
Mohair is a fluffy yarn, made of wool. Such yarn knitted warm winter clothes.
novelty yarn. This yarn is also known Melange. It includes part of the natural and man-made fibers. Usually, it has a different texture, eg, boucle or shishechki.
brilliant. This yarn is a mixture of a core yarn, acrylic and viscose.
Fancy yarns. This thread is obtained by mixing fibers of different not only in color, but also in quality and made by special technology.
Wool. Made from sheep's wool. Ideal for smooth, relief and multicolored patterns.

What else should pay attention when choosing needles and yarn:

For those, who want to learn to knit and takes the instrument for the first time in the hands of, Knitting is the beginning of training techniques threads and spokes correct location, and a set of primary loops. Hinges can dial one of the methods described below, wherein the first core set is suitable for, and the second is used, if necessary, extend the web or collect additional loops:

1 main way. Hinges are typed on two spokes, this is done, so that when they are not set too pulled together, and one easily could vyvyazyvayut new tabs. The spokes are placed in the left hand, and held just above their start with three fingers: big, the index and middle. Thread jumped on the thumb and index finger of his left hand in such a way, to its end lying on the index finger and went into the palm, and the other end, extending from the coil, swathes of the thumb and also went into the palm. The tips of the thread lightly adhere the remaining fingers of the hand. After correct positioning, the spokes are threaded under the first thread, located on the index finger, and then at the end of, draped on the thumb. Then the needles being moved towards the index finger and cling, thread located thereon via first directional movement up and then down and then the spokes are threaded with the thread again into the loop, formed on the thumb. At the end of the first loop knitting yarn is removed from the fingers and loop, formed on the spokes tightened. In order to make the second and all the other loop, thread again placed on the thumb and forefinger, and in the same way, as for the first loops repeat all steps. Once the required number of loops will knit, one of the spokes neatly removed from the loop.

2 way of. Spokes as in the first method,, must be placed in the right hand, whereupon the working thread jumped on the index finger of the left hand and the needles and removed poddevat formed on the finger tab. Then thread, extending from the coil is pulled until, as it will smooth, but not too tightly laced Collar.

The main types of loops and knitting techniques

After mastering the technique of knitting of the first series of loops, following, What you need to learn how to start it to knit the main hinge on which to base almost every figure. These loops are called front and Wrong. Consider the process of knitting each of them:
1)For knitting facial loops free spoke plant in the middle of the loops and pulled her working thread, in this way, A new loop is formed.
2)Purl loops is knitted as follows. Free needle is put through the wall loops from left to right, then before this loop throws a working thread and is pulled through the loop from left to right movement spoke.

With the help of the above loops made such popular knitted and , as:

Besides, by means of alternating right and wrong loops can perform various kinds of patterns, the simplest of which are squares and rhombuses, and for more complex graphics, and breedings invented various schemes, learning to read that, you can set up any favorite thing.

knitting scheme and how to read them

It is now thought up a huge variety of schemes, revealing the different techniques of knitting. Their purpose is, to tell, how the product was created, and to reduce the times are too long verbal description of the whole process. Such schemes can be seen in every fashion magazine on knitting. When you first look at them, they may seem incredibly difficult to parse, but actually reading them there is absolutely nothing complicated. To do this, just need to pay attention to the transcript of all symbols, members of the scheme, and some can even remember the basic, and also to know more of the following rules of their little reading:

For the basic and most frequently used loops, the following designations:

The end of knitting

Unlike crochet, where at the end of work, necessary to fix only one loop, product related spokes finished closing all the loops of the last row. This is done in the following sequence:
The first two tabs, starting from the front edge provyazyvayutsya, if the front side, or purl on wrong side.
Then knit loop, make a copy of the spokes on the needle and returns to the rest of the loops.
Then, the two loops must be knit together again and throw a new loop on the left needle. In this way, provyazyvaniya the loop continues until, while on the left spokes will not remain a loop, which must be secured with a hook, for this hook is threaded in a loop, then he caught a working thread and protyagtvaetsya through the last loop of a number of. Then the thread is cut, and the resulting loop is delayed until the knot.

Once you have fully mastered the necessary information and basic techniques of knitting, stocked with the necessary tools and materials, you can safely proceed to create and start to dress yourself and your loved ones in a beautiful knitted little things, by their own hands.