How to draw a rabbit? 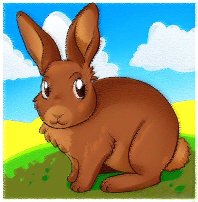 First of all, should present, some want to see the hare. What can you say about his character, physique and posture. After that, you can find a suitable image and redraw. A more promising option - learn more in detail, how to draw a rabbit yourself.
There are a variety of options for a recognizable image. To build the image, person, did not know how to draw, it is necessary to perform a few exercises. Each time the result will be better, and search patterns do not have to.

First, you need to remember, It looks like a hare. In any of its illustration will be present characteristic elements:

If these signs are present figure, the hare will be recognizable, how to draw all the rest is of no importance. In any case, do not get a realistic image of a hare, and stylized. It can make fun or sad, scared or brave. It all depends on the artist.
You can draw the outline with a pencil, and then paint it.

Several variants, how to draw a rabbit 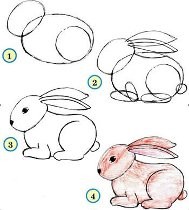