How to draw Naruto? 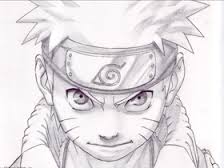 Naruto - Ninja Boy. He - cartoon character. The boy has a beautiful appearance kinogeroya. He likes children. Not everyone has the talent of the artist, but you can understand, how to draw Naruto yourself.

Drawing begins with the person. The first step - to draw a circle. Add a small flat bottom, triangular protrusion. This will be the chin. To further drawing is necessary to carry out auxiliary lines. The first line is drawn vertically divides in half circle. second line, horizontal, It passes through the eye level. In operation, the auxiliary line will be deleted eraser.
From the vertical centerline at an equal distance on both sides outline the eyes. The relatively large size of their faces, and are somewhat similar to a cat. On the pupils large and black do not have to leave the shaded areas - highlights. Without them, your eyes will be flat. Iris can be painted, and proteins note shade. So the eyes will have a capacity of.
Draw on the forehead bandage, the center of which it is necessary to draw a sign of Konoha, it can be cut around the thick line. dressing contours dorisuem after hair.
Nose near departs from the axial and represents two stubby line, almost point. Below the nose draw mouth. The upper lip depict thin line, slightly bent upward at the ends. It turns easy grin. Slightly below the wires of the second, short, straight line. It depicts the lower lip.
Eyebrows from the inside of the eyes go up. This direction gives the expression of the severity of the person. On each cheek draw three stripes.
The height of the hairstyle is about one-third of the face. Hairstyle represents straggly, unruly, triangular strand. Drawing on the two locks on each side at eye level. Then paint over the hair dressing, as if falling down on his forehead. Finally, locks, sticking up. Remember the height hairstyles. To locks have to impose shadows, to give your hair volume. If you are able to draw the hair and eyes, then you almost know, how to draw naruto.
After working with hair draw the ears. they are small, but do not rush, they must draw the.
Draw the neck in the form of two short lines. Slightly departing from the lines, draw the collar. Near the back of the neck visible strands of hair. On the collar in the middle zipper. behind, one can see the ends of the collar bandana. On the neck casts a shadow on the chin and collar. 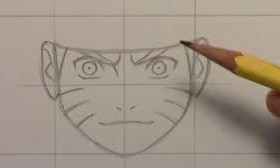 Were putting the finishing touches. It is necessary to remove the auxiliary line and add the necessary accents. After completion of hairstyles are making a shadow image Bandage, draw out the insertion path and shadow try to show, the insert metal. It is necessary to add shadows under the eyebrows, under the nose. Now the figure has become more expressive and voluminous. Question, How to draw Naruto, no longer there.
If the train, the, using this technique, it will be possible to draw and other heroes.